A the Symbol Shifter

"Now I know my sense of character! Next time won't you hang out with me!" - A's official catchphrase

A the Symbol Shifter (I 8 A B) is one of the main heroes in the MPM franchise.

A is very nice and creative to his fellow Balloonatics. He is also a frequent editor in the Parade History Station, and if any of his friends somehow die in an accident, he has the ability to recover anyone who gets seriously injured (or in rare cases, killed) using his magic wrist. His best friends and Idol Balloonatics are SpongeField AlphaLoud -- as they are both fun-lovers and both love Nickelodeon -- and Gabby the Gelatin Girl,who taught him how to shape-shift.

Much like Four and X from BFB, as well as Two from TPOT, he is a black-outlined symbol. He is mostly a red letter "A" with lighter-red limbs, while he can also shift his body into a letter "I" colored blue, a number "8" colored green, and a letter "B" colored yellow. 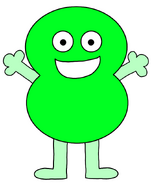 His "B" form
Add a photo to this gallery

Retrieved from "https://macys-parade-mysteries-the-adventure-begins.fandom.com/wiki/A_the_Symbol_Shifter?oldid=7076"
Community content is available under CC-BY-SA unless otherwise noted.