SpongeField as seen in the official poster.

SpongeField, along with many of the other main cast members, in a promotional image. 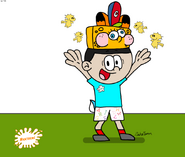 SpongeField gets warm wishes from his friends on his 13th birthday.

SpongeField is proven to be a very funny guy as two girls laugh at his jokes in this picture.

SpongeField if he was a Macy's Parade giant balloon.

Despite not having much in common, SpongeField and Derilay still have a close relationship and share a friendly hug.

SpongeField and Riley meet up for the first time, as Riley delivers Buster ToonStock back to his respectful owner, and SpongeField soon develops feelings for her. 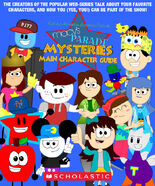 SpongeField as seen on the cover for an MPM character guide book.

A poster of SpongeField, showing him with the Macy's Parade balloons of the 1980's.
Add a photo to this gallery
Retrieved from "https://macys-parade-mysteries-the-adventure-begins.fandom.com/wiki/Gallery:_SpongeField_AlphaLoud?oldid=9598"
Community content is available under CC-BY-SA unless otherwise noted.